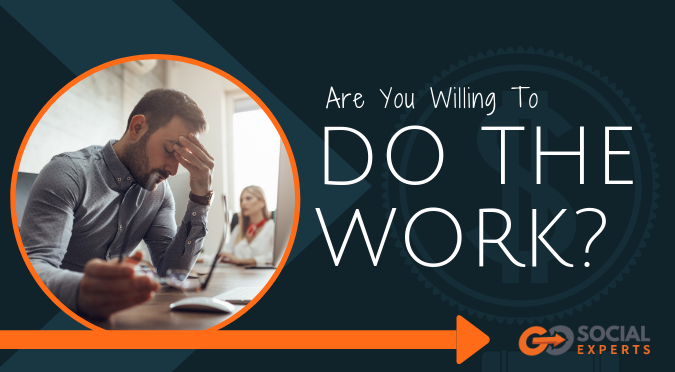 How many times have you said it yourself?

Well, what is stopping you?

Most of us can accomplish anything we want to if we put our mind to it.

Why aren’t we putting our mind and efforts to it?

There are several reasons that come to mind, but for now, I’m going to say the one that really makes the difference is we don’t want it all that bad.

While many times “it” would be nice, we aren’t willing to put in the effort required to have “it”.

What do I mean?

As many of you know I ran a marathon. I’m in the best shape of my life now.

To do that required time and effort.

I ran four days a week. And Saturday mornings were the longest runs. I spent 2 to 4 hours running on Saturdays to complete the training program.

Anyone willing to invest the time can do it. There are training programs for all ages and abilities for training for marathons.

That may not be your thing.

What about making a million dollars? Everyone says they want to do it, but most people in the US never accumulate more than $100,000.

Why don’t they? Well while they say they want it are they willing to do what it takes to get it?

Are they willing to learn, study, test, spend the time that they could be doing something else or not?

According to the numbers, most aren’t willing.

What about being a healthy weight?

How to be at a healthy weight isn’t a secret.

Yet how many people aren’t feeling good and don’t take actions to make a difference?

I want a successful business.

Great, are you willing to invest the time and money to make it happen?

Do you want a successful marketing system for your business?

Are you willing to invest the time and money in learning what you need to do and create and then implement it?

This includes the implementation of the plan.

It’s going to cost money to find out if it works.

Earlier this year I invested $10,000 into a market and at the current rate, I’ll get my money back in the next five years if everyone stays.

Not a good return.

The good thing is that I know what doesn’t work, and I have some marketing assets I can use in other ways.

Recently I had a client ask me about revamping what we were doing for them and expanding it.

I presented a plan to them to make that happen and their answer was, they didn’t think it would take that much.

They wanted to grow to generate over $1,000,000 a month in new business and they were shocked that it might cost them twenty to thirty thousand dollars a month to make that happen.

How about you? What do you want?

Are you willing to do what it takes to make it happen?

If you are congratulations! You’re in the minority.

Pick what you want and get started accomplishing it.

P.S. If having a Facebook and Online Marketing system that brings you sales 24/7 is one of the things you want to make happen. Get Started. Schedule a time to talk with me and I’ll ask you some questions and then give you three ideas. If you want my help implementing them we can see if it makes sense for both of us. www.gosocialexperts.com/callbrian30